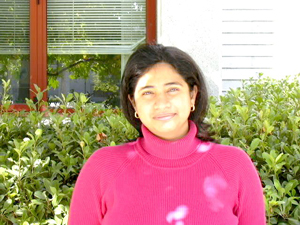 Anu is a post-doctoral researcher exploring the genetic basis of adaptive evolution! Her current research involves discovery and detecting SNPs in several evolved strains of E. coli. She is also updating the Haemophilus model and would be growing Haemophilus to determine its growth on several carbon sources and test it's resistance to antibiotics. She is also interested in building a model for steroid metabolism.